Rory’s choice for a bottleneck or slide is an empty Coricidin bottle [Coricidin is an American cold remedy], which he’ll use for months on end, occasionally switching to a regular steel tube for a slightly sharper tone. Although he prefers placing it on his stronger 3rd finger, the construction of the National (where the neck joins the body at the 12th fret) requires that he use a smaller steel slide on his little finger. This gives him a better vibrato. Overall, glass is Rory’s first choice.

Rory en 1977: "“If you want to get a really sharp tone like, say, Muddy Waters gets, I don't think glass would be suitable, but it’s good for a nice, clean, pure slide.
I used to use a highly shined copper one, which was a bit noisy, though really gritty. The thing is, they don't sell Coricidin in England so I have to pick up a few more bottles of it everytime I’m in the States. I think they make the best bottleneck you can get, though I wish they would make them in a slightly smaller size, so I could use one on my small finger. I only hope that the company doesn’t move over to plastic. We’ll all be ruined then!" 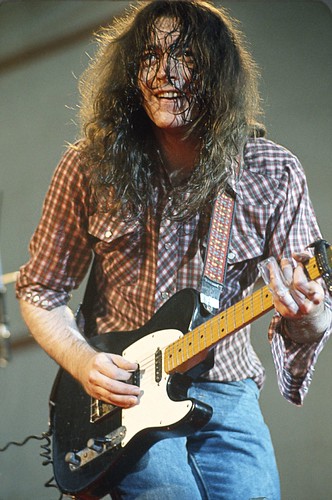 Tell us about your left and right hand techniques.

Where did you pick that up?

I began playing just straightforward plectrum style, but as things went along it just seemed to fall into place. Besides, I played in some dance bands and show bands in Ireland, where as often as not we didn't have a rhythm guitarist, so you'd play the rhythm part as well as the lead. Say you were doing a Shadows song—they were like the English Ventures—you’d have to fit in the melody and a form of rhythm. That's probably where I got it from, plus Ricky Nelson records with James Burton on guitar. He was obviously using his thumb and fingers or a pick and fingers.

So would you advise learning to finger-pick with bare fingers, with fingerpicks, or with a plectrum and the fingers?

Well, if you could wave a magic wand, you should tell the person to try all forms and be familiar with them all—anything instead of just using the plectrum alone. I think at some point in every song you're going to need the fingers. If you're interested in classical guitar, it's nice to get a couple of years training at that, and then you 'd have very strong hands, and you could skip thumbpicks and metal picks or whatever.

Do you use fingerpicks mainly for volume, or do you use them for a specific sound?

I would use them for volume, you know, and to save wear and tear. If I were a highly developed thumb-and-fingers person I’d just use the bare skin, but you do get the real sharp, biting sound with the metal claws. Gary Davis just used the one plastic fingerpick, and he seemed to make great sense out of that.

Do you see any advantage to the plectrum and fingers over thumbpick and fingerpicks?

The advantage of the plectrum and fingers is that you can forget about the fingers at certain points where, say, you're doing a Buddy Holly number or an Eddie Cochran thing or a modern blues, where the fingers don't really come in, where you really have to sledgehammer the guitar. If you were trying to play -.electric blues thing. fingerpicks might become a little bit cumbersome—although they never seemed to get in Freddie King's way; he only used the thumbpick and one metal fingerpick. which surprised me. Then there's an English guitarist, Tony McPhee, who plays with the thumb and one finger. I think John Hammond does it as well, although he picks, too. Johnny Winter plays with a thumbpick and his bare finger, kind of like Muddy Waters, although Muddy uses a pick on his index finger. Let's put it this way: If you want to play a lot of electric blues or electric blues-cumrock or whatever, the plectrum plus the fingers is probably the best common denominator. Then acoustically you can imitate the Doc Watson style. But to be true to the old ethnic folk and blues traditions I guess you really should be at least familiar with using your thumb and fingers, because there are certain numbers where the plectrum is a hindrance.

Would a plectrum be a hindrance when you're slapping the string on some tunes?

I can get away with that, oddly enough, but that depends on how difficult the piece is. For instance, I don't think you could do a Blind Blake piece with plectrum and fingers, but you'd at least manage a version of it. It depends on how true to the old version you're trying to get. Maybe you're Just playing it for fun; maybe you're doing it for very aesthetic reasons. Most young guitar players nowadays, even if they've only been listening to people like the Beatles, must know that they couldn't do all those things with just a plectrum. Even like “Dear Prudence” on the Beatles’ “white album” [The Beatles, Apple, SWBO-lOl] —that's a D tuning or something, and Lennon is playing with his fingers —he's always been quite fond of that.

So you think it's very important for a student to learn to use his fingers as well as a pick.
Yeah, even if he never touches folk or blues music. Of course, the sky's the limit nowadays, and I suppose for Chuck Berry rock and roll it doesn't matter too much, but even Keith Richard uses his fingers on things like “Honky Tonk Woman.” 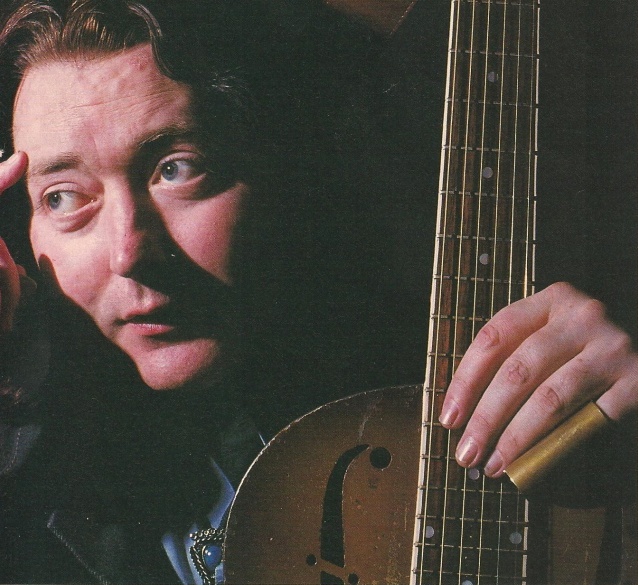 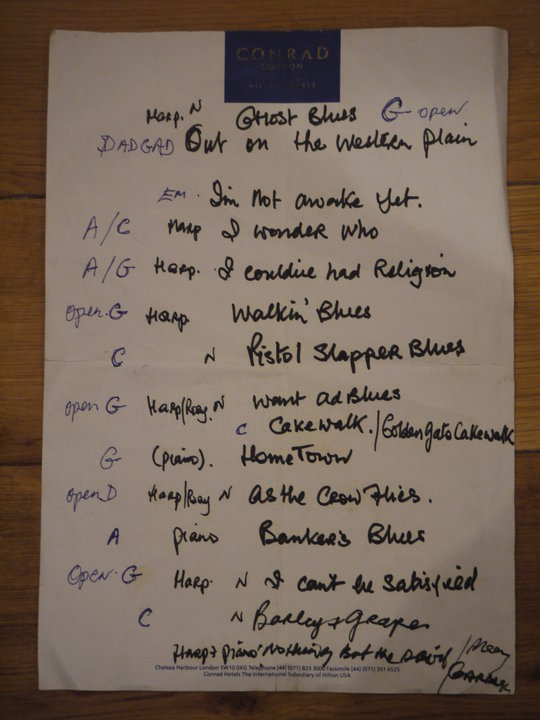