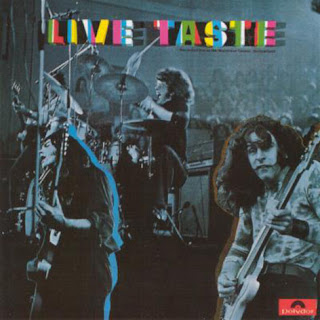 Rocks as hard as the studio albums, but not too different.
Best song: GAMBLIN' BLUES

Taste have had three different live albums out (a bizarre record for a band that's only had two studio albums and lasted for about a couple of years - sure they had a good live reputation, but hey, they ain't no Grateful Dead), and, perversely enough, the one I have is arguably the hardest to find. Therefore, I doubt if anybody will ever find a suitable use for this here review, but at least I'll boast a review that no other record review site will ever have! Tee hee hee! If you find another site that reviews Live Taste, feel free to E-mail me! Tell me my site is no longer special! Trample on me and push me into the dirt! Go on, willya?
Oh, I suppose I'm just filling Web space here so as to make this review seem longer than it actually will be. Well, that's no big surprise.

This live album only has five songs on it (and one is broken in two parts, as if they couldn't fit it together on one side of the LP, although, if you check the running times, you'll see they were just trying to cover the fact that the album was so shamelessly short). Three of these are taken from the band's debut album, and two are old-time live favourites culled, well, from expertise. Now the big rub lies in the fact that, while Taste were a really cookin' live band, they also managed to get most of that gritty, sloppy live sound on their studio albums (Taste, for instance, has at max one rhythm guitar overdub on a couple of tracks), which kinda renders this live experience superfluous. All the songs are slightly extended, usually with bits and pieces of Rory soloing, but that's no big difference, and if you're not a researcher, you simply won't be able to tell which is the original and which is the live version. Thus, 'Catfish' sucks just like it sucked on the original, and no amount of soloing or screaming can save it; and 'Sugar Mama' rules just like it ruled on the original, so they might even have done away with those impressive wall-of-sound passages Rory gives out from time to time, it would still rule. 'Same Old Story' gets a somewhat more erratic and violent treatment, plus the solos are really desperate, but I'm pretty sure many will prefer the more tight, restrained studio original with the overdubbed rhythm guitar.

After all, Taste are not the Who or Cream: their bass player is competent, but not as flashy or steady, and Rory just couldn't take off the ground completely on the fast numbers. Also, he overdoes it a bit with the screaming thing on the lengthy blues numbers - sometimes it seems to me that he's just blabbering away the lyrics as fast as possible to concentrate on the guitar playing. It feels rather irritating - maybe blurting out the lyrics in such a frenzy and without minding the actual articulation is a blues trademark accepted among some of the Delta public, but Rory's similar deliveries don't feel authentic. He should better stick to a careful singing style.

Anyway, that leaves us with just two numbers that didn't make it onto Taste or On The Boards (as a matter of fact, none of the Boards tracks made it to here, and I'm a bit puzzled as to why - maybe they wanted to preserve their blues purist image on stage?), which are the ragged slide blues 'Gamblin' Blues', and the speeded-up, turned-rockabilly version of Big Bill Broonzy's 'I Feel So Good'. Together with 'Same Old Story', the latter is the fastest song on the album, and in a certain way reminds me of all those intoxicating show openers by Ten Years After, like 'I May Be Wrong'. Not that Rory got the chops of Alvin Lee, of course: he's not so gimmicky or fast-fingered. Where Alvin was able to get away with fast blues as fun, almost comedy numbers, Gallagher is more heavy-handed and serious, and the results are just not as breathtaking. And, of course, the singing is so-so too; if you want to hear a good white boys' version of this number, be sure to check out the Faces' Long Player with Rod Stewart ripping the tune to shreds. Plus, 'I Feel So Good' is also the polygon for the other band members to display their, er, 'talents', with mercifully short drum and bass solos; competent, but just as good as billions of solos by billions of bands. Beh. So my bet, yeah, my bet is on 'Gamblin' Blues', a superb, stripped-down number that really shows how much of an inborn guitar player Rory Gallagher really was. I've always been of opinion that true guitar talent manifests itself in its full form only on acoustic guitar, or, at least, on undistorted, clear electric guitar, where you can't mask the lack of technique by any weird gimmicks, and this slide fiesta works out just fine, not boring at all. Oh, and while we're on the subject, be sure to check the 'Villanova Junction' part of Hendrix's improvisations on the Live At Woodstock album. Beats many of his distorted chaotic rave-ups to hell.

But that's about it. While I do enjoy the album as a whole, what with my crazy Taste fetish and all (pullin' your leg, of course, but in case you haven't noticed, I do have a spot soft for the band somewhere in one of my trusty ventricles), I can't really say it is 'recommended only for diehard blues-rock fans', because, on one side, it is understood, on the other, how can you recommend a record that's about as easy to find as a latest copy of Homer's memoirs to anybody? Just thank me for providing you with an interesting, intriguing and highly humoristic review. Or curse me for boring you with an overlong, annoying and deadly dull review, it's all up to you. Get on wid' ya, woncha? 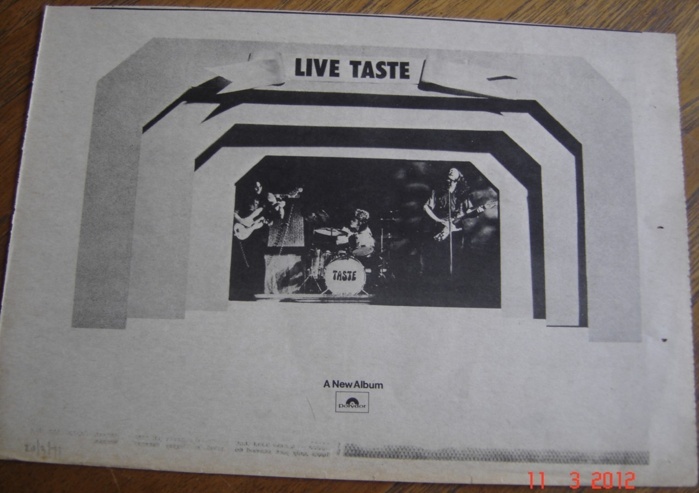 "To many thousands of people, Taste meant hours of enjoyment in small-packed sweaty clubs up and down the country. They meant that three piece group from Ireland, who did what few groups ever do by making the top on merit of their music. Taste meant three brilliant soloists who, together, formed one of the tightest groups around. But above all, they simply meant Taste the magic of whom it was impossible to catch with words.

When Taste split we all lost part of ourselves. As we have to learn to live with it, this album is going to make living without Taste easier. Take this piece of black plastic, put it on your player, close your eyes and let your imagination run.

This, their third best album, is what Taste were all about. THIS IS TASTE.