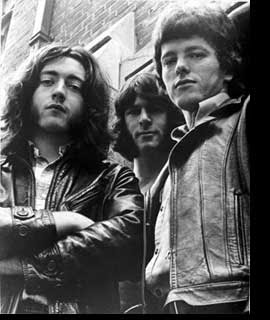 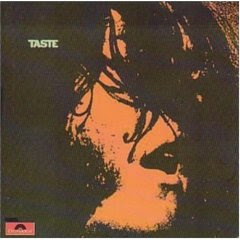 ZZ: How did the first Taste start up?

Rory: When I got back to Cork, the trio that I just told you about split up, and at the same time Norman Damery and Eric Kittringham left a group called the Axels, which was Cork's big group at the time. So there was a chance to get together with two really good musicians, and I took it. We played all over the place —moved to Belfast for a while, came over to England, went to Hamburg — and we stayed together from around August 66 to Summer 1968. It was very much a case of sleeping in the van, and long hard grinds around the various clubs, but it was pretty enjoyable even so... and then we just broke up — Eric wanted to start his own band and Norman wanted to get off the road for a while, and so we packed it in.

ZZ: By this time, you'd got more into Blues as opposed to Chuck Berry style ....... how did you become influenced in that direction?

Rory: I began to hear people like Buddy Guy, and some of the older acoustic players... it was just a gradual move; for instance I found out about Willie Dixon from Chuck Berry records, and then discovered he also wrote songs that were recorded by Muddy Waters.. . . and so I got into his music. You know how you get interested in something and try to find out more it was like that really.

ZZ: Tell us a bit about Hamburg... was it the usual 5 sets a night scene?

Rory: Yes, we'd play 45 minutes in each hour, and we'd go on stage about four or five times a night — that's weekdays. . on Saturdays we had to do seven sets. I was never there for months on end, like the Beatles, but it was good hard labour all the same. I wasn't complaining though, because in the showband it wasn't unusual to do five hours on your feet without a break... you'd get off the stage and your fingers would be mashed to pieces. I enjoyed every minute of Hamburg though. .. . it was fun unlimited really, because you often shared the bill with another band, and we used to have a lot of good times.

ZZ: Do you remember which other groups were over there when you were?

Rory: Well, you had people who were big heroes in Germany but unheard of over here.. . like Lee Curtis, the Bats a Scottish group called the Live Wires, and a bloke called Johnny Law. .. . and then there were bands like The VIPs, who later became Spooky Tooth, and the Remo 4, who developed into Ashton Gardner & Dyke. It was good fun over there.

ZZ: So when that first Taste split up, you formed the next Taste and came to seek fame and fortune in London — is that right?

Rory: The first Taste had come over in May and split in August...then John and Richard joined and we got the recording contract with Polydor, who'd had their eye on Taste for some time.

ZZ: I read somewhere that you almost signed with Major Minor...

Rory: That's another story... . a Belfast incident with the first Taste. When we were living there, someone suggested that we do some demos in a certain studio. I don't really know the full story, but it looks as if they're going to be released soon....

ZZ: So when Taste 2 came over here, did you have a London base, or were you still living out of a suitcase?

Rory: No — the first time we were over it was guest houses, sleeping in the van and that sort of caper, but this time we had a flat in Earls Court.. . . and by this time we had a record company, and were also looked after by Stigwoods.

ZZ: Did you have all the gear you needed?

ZZ: Had you come over thinking that the streets of London were paved with gold?

Rory: Oh no, I knew what it was like. I’d been over with the showband, played the dancehalls and on my nights off I’d go to places like the Marquee — so I was fairly familiar with what was going on and knew what to expect. I knew there would be no sudden rise to fame, as it were, and, sure enough, we'd go to a gig hoping to impress so that they booked us back. We'd go out for ten quid or fifteen quid and hope to get booked back for more and our diary was always quite full because we didn't mind going up to Inverness one night and Plymouth the next, both for low money..., it was the only way to establish ourselves as far as we were concerned, because people soon forget what they read in a paper but they rarely forget a gig. . . .so we just gradually worked our way up.

ZZ: Looking back, how do you feel about the three Taste albums?

Rory: In what respects?

ZZ: Well, for instance, a lot of people thought the first one was a bit raw.

Rory: Well, around that time, everyone was using reverb echoes on their guitar, and we just wanted to go in a cut an album direct and, as you say, raw. . . we didn't want all that gimmicky sound of guitars floating in the wilderness. We've learnt a lot since then, of course — like you can't just go in and record it as flat as a pancake, or there won't be any depth or dimension. . . you've got to put a bit of echo on it. Anyway, that first album was a bit raw, yes, but I'm quite happy with it. We'd been playing a lot longer when we came to make ‘On the Boards’, but the approach was still the same - we didn't want to gimmick it up too much. Obviously we learnt how to enhance the sound a little, but we still steered clear of the multi-multi gimmick thing. 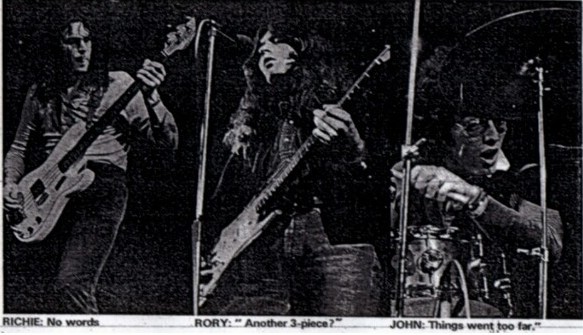 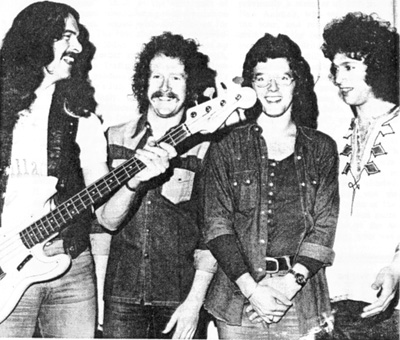 "I am from Belfast and have been a Taste/Rory fan since 1969. I know he gave a huge amount of pleasure to so many people from all over the world, but to us in Belfast, he was our local hero, the only person who would play Belfast year after year through the tough years on the 1970s and bring the different communities together as one. He was fantastic to see and hear anywhere, but in Belfast, it was a whole different atmosphere." 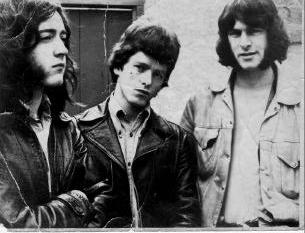