This superb DVD will teach you five tracks from this legendary blues-rock guitarist and songwriter... learn every riff and solo note for note! Guitar lessons include:

Michael Casswell is a highly sought after freelance guitarist and producer. He has played and toured with many well known bands and artists as diverse as Brian May, Cozy Powell and Ronan Keating to name just a few. His playing can be heard on numerous film and TV soundtracks."

Described by Jimi Hendrix as the best guitarist in the world, Rory Gallagher is cited by many modern guitarists including Slash, The Edge and Joe Bonamassa as an inspiration in their formative years. Rory was an Irish Blues / Rock guitarist, famed for his talent, dedication to his craft and his legendary marathon performances.

Learn to Play Rory Gallagher (RRP £24.99) – is over two hours of outstanding guitar tuition by acclaimed guitar teacher Mike Casswell. This double DVD set breaks down five classic Rory Gallagher tracks into easy to learn sections which let you learn every riff and solo note for note. Tracks included on these guitar tuition DVDs are Do You Read Me, Secret Agent, Moonchild, Tattoo Lady and Shadow Play. Mike sharescool little tricks with you as he advises you on how to get the best touch and tone to achieve an out of phase sound similar to Rory Gallagher. Techniques covered include power chords, bending, harmonics, distortion, and how to get the same sound with different hand positions – choose the one most comfortable for you.

Guitar tutor, Mike Casswell, is a world renowned player with an extensive musical history having toured with many of the greatest, played on TV ads, jingles and film soundtracks and worked on theatre productions including We Will Rock You. He is a versatile player with a wide range of influences including Rory Gallagher himself and clear easy manner as he teaches you these fabulous tracks. 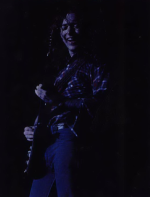