The concert and the concept

"This may have been Rory's northernmost concert, as Tromso is a town far far north in Norway, high above the polar circle. It was, and still sure is, a lively place, and the setting for Rory's visit was to be the main and final attraction for the days of the Brazil-inspired carnival (!) taking place in the summer-chilly city. Not everyone joined in this bold yet naive attempt to turn Norway into South America (the idea was abandoned after a couple of years with too many drunken Norwegians scaring children in the streets), but many fans came a long way to see Rory Gallagher.

Obviously the promoters were counting on at least 2-3000 people for this concert in Tromsø's sportshall, and that's probably why the stagefloor was risen to the ridiculous heigth of approx 2,5 meters. For the hardcore fans in the front row this was a bit of a downer, especially considering how good visual contact and sweaty hands pounding the stage floor could have made this meeting with Rory even greater. And I would guess Rory too felt there was something missing.

Rory and the band did their very best, but a crowd of only 800 in an oversized venue is not easy to get into the mood. People in the front rows had a splendid time, and the sometimes heavy cheering and applause from the back of the hall must have meant that they too enjoyed the show. But it could have been so much better in a smaller venue, or with more people (very disappointing by the Tromso inhabitants - I guess many of them lived to regret it).

"- I had a good time", a smiling Rory told the local newspaper after the show. "- It's fun to be so far north. Just got to live with the fact that not too many came to the concert. We can't expect everything to be like Madison Square Garden."

In my opinion Rory, Gerry and Brendan did an excellent job throughout the whole set list, and Rory seemed to be very inspired - working the audience and smiling. The acoustic tunes got a great reception, where people really joined in on "Out On The Western Plain". Other very outstanding versions (in my memory) were "I Wonder Who", "Big Guns", "Missisippi Sheiks", "Off The Handle", "Tatto'd Lady", "Philby" and of course...

This concert also included a happening later known as "The electric crash version of Bad Penny". This is the story: The band starts playing Bad Penny, and after a while some part of the stage's electricity system breaks down. There's no sound from either guitar or bass, only drums and vocal. Brendan keeps the drumbeat going, and the front row joins in with high spirit and handclapping. The mood is good, and some even think this is a part of the show. Rory realizes that the electricity may not return very quickly, so he picks up the harmonica and delivers a long solo. It is very well recieved, but can only last for so long, and there's still no electricity. He then informs us that there's a technical problem and tell us to "please don't go away" (as if...). The drums are still keeping it together, and Gerry is out showing us how to put our hands together. While Rory strokes the strings checking for sound, he starts a bit of vocal jamming with suitable lines like "come back baby", ending up with a little vocal humming in the mic. Surprisingly, the audience responds with a clear and massive copy of his humming. He smiles baffled to Gerry, like he's saying "wow, they really wanna party!". Quickly back at the mic, shoulders notably lower, he delves into a long and good call-response session with the audience. It's live and fantastic, but this can also only last for so long, so when suddenly the guitar responds with electric amplified sound to one of his test strokes, the hall is screaming and applauding. Payback time! This would be last chance to fasten seatbelts, because now Rory was more than ready for take-off: Off we flew into a glorious jam with wild slide solos, intense and sweaty bass vs guitar duel, and tons of extraordinary high class blues rock groove. It all clocked in at 14 minutes, after which an exhausted Rory expressed his thankfulness to the audience. Some bootlegs claim this version is from Stockholm or other places, but now you all know where it really happened. "

Wayward Child
When My Baby She Left Me 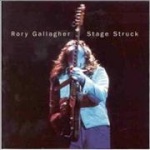